A bestial romance novelette about a girl and a rescued chimpanzee who fall in love. Their union results in the birth of “the missing link.”

Dedicated to: my Grandmas, sorry Grandmas

The “missing link” may have existed in the past, but, like the mythical “lyger,” this creature is sterile and cannot reproduce, hence the die-out of the species as humans diverged from their chimpanzee brothers and sisters over the years, a separation which began with the discovery of fire.

As time went on, humans became more and more separated from the natural world as their species multiplied and spread across the planet, learning to live in concrete jungles, forgetting the wisdom of the forest.

The love between man and chimp dwindled too as man forgot his roots in the forest. The species interacted less and less, until at some point they stopped relations completely.

That is why humans eventually lost record of the “missing link” and remain bewildered as to how humans diverged from their closest relatives in the animal kingdom, Chimpanzees and Gorillas.

That is, until Girl returned to the forest and met Chimp.

Chimp was a broken soul until he met Girl. He had seen his mother killed by poachers as a young chimplette and was rescued shortly after by a well known rescue group called Ape Action Africa. He was taken to their headquarters in Camaroon and received the tenderest of care by the dedicated staff comprised of local women. Unfortunately, like many chimps in Chimps situation, Chimp suffered terribly from depression, a common and often fatal consequence of what Chimp had been through. …

Girl grew up in a big city across the world. She learned about Chimpanzees at a young age and fell in love whith the idea of these furry creatures, so much like humans and yet so different. She was fascinated by how they lived so simply and so closely with nature. Unlike humans, they did not seem to live out of balance with the natural world, and she wondered if we humans could learn a thing or two from our hairy cousins in the forest. So she vowed to go there and do that, to study Chimpanzees. Her goal was to see if the chimps could give her some lifestyle tips that she could share with her fellow humans and perhaps restore some balance to the planet, which everyone generally agreed was going to shite due to human activities on the Earth.

Well, Girl got a whole lot more than she bargained for when she finally made it to study the Chimpanzees. She ended up falling in love with Chimp, who was clingly and needy due to his traumatized beginnings. For whatever reason, she liked that, and there was something about his his smile. Well, I wont go into too much detail here, but they…ya know…and 9 months later Girl gave birth to the hairiest, strangest looking baby you ever did see. Turns out this child had curious genetics…unlike humans, who share 98% of the genetic material of Chimpanzees, this baby had 99% of the genetic material, thus it was deemed the “Missing Link.” They named the child Marty.

Marty was a curious child, quite wild in many ways but also quite gentle and a bit less hairy than a Chimp. Marty could walk upright and looked a bit more human than other Chimpanzees the child’s age. It was determined early on that Marty was sterile, much like a mule or lyger. Indeed this was, “The Missing Link.”

Marty was raised under the close watch of scientists and was able to teach us humans a lot about how to live closely with nature.

There is one memorable instance of a banana eating contest in which Marty blew all the other human participants away, eating a whopping 35 bananas in one sitting.

Balance has been restored to the planet, now that Marty has given us humans insight into how to live more gently in the world.

Greetings~ This blog connects electronic waste and ape conservation among other things. The purpose of this blog is to share stories and creative endeavors, receive feedback, and create community. If you'd like to get involved/collaborate, holla! View all posts by junebugbayer

Follow Art and Adventure for Ape Conservation on WordPress.com 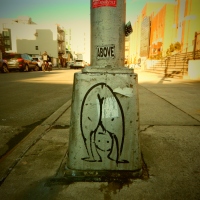