This is an essay about tap shoes and tap practicing surfaces. It is written for those interested in tap dancing and looking for some pointers to get started. It also loosely applies to any musician looking for their first instrument.

Like any instrument, tap shoes come in a variety of qualities and styles. What works for you will ultimately depend on your personal style, what sound you are going for, and your budget.

Ultimately, you really need an instrument that makes you want to play it. One that calls to you and feels good to hold, wear, listen to, and play.

Thats why, if you have the means, go ahead and treat yourself to a decent quality instrument. Also, research what is out there. I made this article to help.

It is possible to sound good with any quality instrument, and its definitely tempting, with the uncertainty of just starting out, to go for the least-expensive option, but let me just advise from experience that reaching for that mid-range instrument is soooo worth it. Its so much more satisfying to play something that is well crafted, stylish, sturdy, and capable of producing a rich sound. That quality will call to you from the corner of the room and beg you to practice. In the long run, you will be happy if you go for a better quality instrument because you will have a quality instrument. And anyway, you may end up spending just as much time and money leap-frogging and experimenting as if you just dropped the extra $100 on the good stuff to begin with. Treat yourself.

For myself, I started off with the cheapest ok-quality pair of tap shoes I could find. As I recall, there was only one option at the store that I went to, so it wasn’t much of a choice. I had no information about what else was out there, so I ended up with a pair of Bloch Oxfords for ~$80. Not bad. I didn’t particularly love the way the looked, but since they were tap shoes and I didn’t know of any other stylish options, I was happy with them.

I could have also gone with these, a real cheap-but-cute option from Payless, but I didn’t:

Eventually, I lost my Blochs in a international shipping blunder in which I threw away my postal receipt before the package was delivered. I’ll never know what came of these or the Cajon sent along with it, *tears. Lesson learned – keep tracking number until delivery is confirmed.

All was not lost, however, since I had already purchased another pair of slightly higher quality tap shoes from a fellow student when I was WWOOFing and studying tap in Berlin. They were made with leather inside and had a thicker “build” – the layer of wood under the sole of the shoe, which made for a richer sound. They were Capezio, purchased in San Francisco, I think model K543, about a half-size too big for me, but they worked. 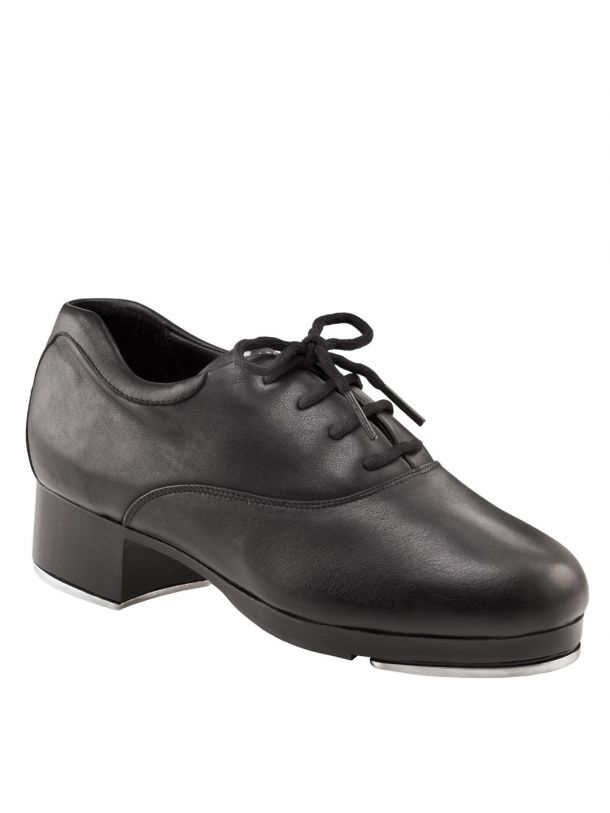 These felt good on my feet, were sturdy, and sounded nice. Like my previous pair, I wasn’t crazy about the way they looked but I wasn’t aware of other options so I remained content.

Once I got to NYC, the cloudy tap shoe skies opened up and shined a golden, sparkly light of wonder upon me. I saw white shoes and green shoes and gold shoes, embellished designs, custom designs, a whole new world of tap shoe styles I never knew existed. Not to mention the dancers in the shoes and their styles of dancing, I had never seen so many tap dancers and such skill. It was amazing. I had stepped into a whole new world of tap.

I remember once when I visited NYC (pre-Berlin) during a port stop when I was working as a lunchlady on the TSGB, I took a tap class at Broadway Dance Center on one of my days of liberty. It was an overwhelming experience, but fun. After class, I checkout out the shoe shop on site and tried on what they had, which were Miller and Ben tap shoes. I had to use a shoe horn to put them on. They were $300. I guffawed and stuck with my Bloch’s.

Eventually, once I moved to New York and my Capezio’s started to wear out, I moved on to the J-Sams by Bloch. (Jason Samuels Smith model, named after tap dancer Jason Samuel’s Smith). They were the best quality pair I’d had thus far with a solid sound capable of being quite loud since they’re a heavy shoe. These shoes are what I would consider medium range shoes, meaning, they aren’t the top of the line in terms of materials, sound quality, or cost. These ran ~$175 and for that cost, they are amazing. So much better than the ones I had started with, which were kindof ugly and had an obnoxiously tinny, flimsy sound. If I could start over again I would start with the J-Sam shoes and skip the crappy beginner shoes. These shoes sound great, look great, and made me want to dance.

The one downside is the material on the inside doesn’t absorb heat well. It gets dirty easily and thus can get smelly. I learned to periodically wash the inside of my shoes to keep the smell away. Its annoying, but I don’t like dancing with socks so it is what it is. I have also tried So Dança tap shoes. There was a pair in the shoe bin at my dance studio so I tried them a few times. They were these, which run ~$200: These are a lighter weight shoe than the Jason Samuel Blochs, their sound is lighter and brighter. They are comfortable, sturdy, and made with quality materials. I was already accustomed to the J-Sams so decided to stick with them, but maybe if I’d started with So Danças I would have preferred them. I consider these two shoes to be in the same mid-range category of goodness.

I have yet to try the tap shoe of all shoes, The Capezio K360s. I’m pretty sure, with customization, they are around $500. Maybe someday. This seems to be the preferred tap shoe among the more advanced dancers. This is their site for custom shoes: Capezio Custom Shoes. There are about 1,000 different color options. Its overwhelming. Miller and Ben also seem to be of the upper echelon of tap shoe. I’ve heard are very stiff and difficult to break in but did try on a used pair once that looked and sounded great.

All this being said, perhaps if I was to start all over again I’d go with the Chloe and Maud tap shoe by Bloch, they’re cute and ~$70. This is the shoe I would recommend for beginners.

As for heels, the whole reason I am writing this today is because I finally found a decent pair of heels! Like the oxfords, I have purchased at least 2 pairs of crappy heels before discovering what is now my favorite tap shoe, the So Dança Chris Matallo Pro TA830. I bought mine 2nd-hand-but-never-worn on Poshmark for $50. I think they normally run ~$200.

This is a great, sturdy heeled shoe made with high quality materials and is built up to create a nice, solid sound. They are comfortable to wear for extended periods of time and don’t even really feel like high heels. I had never heard about them before seeing them on Poshmark.

As far as other pro-level, high heeled tap shoe options I’ve glimpsed and heard talk of, there is La Coquette by Miller and Ben, LaDuca Dance Shoes, and Capezio has some, very pretty:

but I haven’t seen where to buy them other than on the Dancing Fair website. Heads up, Dancing Fair is apparently a good resource for someone who wants to get custom shoes.

Below is what I had tried before and would say don’t even bother. I tried Capezios both times, their cheapest heels. The shoe felt and sounded ick and didn’t breathe:

And these below, FYI, are a very common beginner shoe. I would stay away from these or anything remotely resembling them. Do yourself the favor.

Alright, on to tap practicing surfaces. I’m just going to be brief here because ultimately, I have found a good ol’ cardboard box to be the best practicing surface if making noise is an issue. Otherwise, there is the Fasfoot boards, Omara Sprung Dance Floors, and a slab of Masonite or any scrap wood you can find.